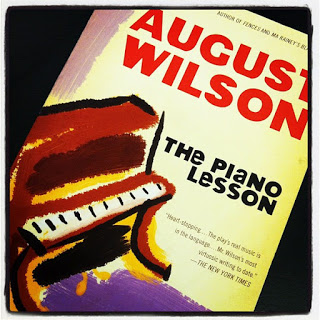 Wilson tells the truth tastefully. He doesn’t veil the pains of Black life, nor does he romanticize them. These plays have a brilliant way of making you consider the world around us as well as our relations with one another.  There are more to these plays than  discussion of Black vs. White, but they’re inescapable –as are typical of the issues of Black vs. White. These plays make one reconsider everything –love, faith, hope, trust, family, friendship, purpose, joy, talent, worth, sacrifice, life, death. I’m telling you. You read one, you’ll want to read the rest.

The beauty of August Wilson‘s language lies in its rugged distastefulness. “Niggers” litter the pages and the rhetoric of the average Black person –in the place and time — is elevated to a language of truth with character of its own. Wilson allows you to experience the nature of each character, providing both explicit insight into how they feel, as well as allowing the reader enough room to speculate emotions –if you want to. I appreciated Wilson’s choice of language because he didn’t hold back. In his comments (which you’ll read in detail later) he mentions providing white readers/Americans a “different way to look at Black Americans” and that, to me, is a scary provision.

August Wilson is the author of 16 plays and the recipient of 27 awards (including two Pulitzer’s and a Tony). Already, this sounds like an intro speech for the talented writer, but unfortunately, Wilson left us with his spirit on October 2nd, 2005. It’s a shame that I’ve started this with the date of his passing rather than that of his birth (April 27th, 1945), but it is also a shame I hadn’t heard of him until about a week ago.  As if the life of a writer, huh? Wilson’s plays place you exactly in their time. The three I read – Ma Rainey’s Black Bottom, Fences, and The Piano Lesson — were all fairly short, extremely entertaining and concise. Each play was about 100 pages, making them a quick read for a reader or a good starting place for someone who doesn’t read often.  I’d found them while looking for a friend – he’d read A Streetcar Named Desire by Tennessee Williams. When looking for a new book to read, go off of what/who you’ve read before. There’s a greater chance you’ll actually like the pick!

Ma Rainey’s Black Bottom takes place in a Chitown studio in the 1920’s.  Ma Rainey (who prefers to be called “Madame” Rainey) is set to record a song on this day. When the play opens up, the studio managers & her band  are getting together & awaiting her arrival.  To everyone’s knowledge, Ma runs the joint.

Throughout the play, morality is battled in various levels. The band has a constant argument as to who calls the shots – some say the musicians, other’s say it’s the white studio managers, most say Ma. There is an ongoing struggle as to who values the music and to what extent. Do the studio managers really value Ma or do they value the money she brings in. Does the band value Ma? If it weren’t for her, they wouldn’t get paid (quite literally). Does Ma value the band? While she has the heart to support, one can’t test her patience too much, because Ma doesn’t play too many games. Or is it God? And is there one? & Who’s God is he really? The band members clash with each other, with the managers, with Ma & with the world within these 111 pages.  As a reader, most of your questions are answered, but in the end, you’re left with one question: Is there still life here?

It’s sometime in the 50’s and Troy is over it. His dreams of becoming a star baseball player left him nowhere and now, as a garbage man in Pittsburg, married with children seems he has very little to look forward to.

Fences takes place in Troy’s front yard as we listen into conversations meant for whomever they are meant for. This play questions privacy and autonomy. How much control do you really have over your life? And what effect do other people have on yours? We see the effect Troy has on his wife, his children, his best friend and even his mistress.

The play challenges our views of the world in respect to what we “deserve” and what we allow other people to do to us. Sometimes, people have an effect on us on purpose –as in providing for us and consciously loving us — other times, they have a residual effect –as in with our friends and whatever our involvement with other people brings into our lives. A simple example of this is that Troy bet his Bono that when he finishes painting his wife’s fence, Bono has to buy his wife a stove. Simple sh*t, but both would probably make a great difference for the women waiting at home for these fellas.  Speaking of… Troy — feeling empty with himself –fills a void by taking on a mistress who ends up giving birth to a child. While his wife, Rose, is a more minor character than he is, throughout the play, we see how she holds the family together –even raising the bastard child as her own.

Now, here are the questions: Are you strong enough? Could you watch your dreams fade away on front of you only to watch someone else chase them? Are you strong enough to support our competition? Do you have enough faith to stand by someone who won’t stand by you? Can you make someone stay? & when you build fences, are you trying to keep things out or in?  You might have to read this one, huh? 😉

It’s 1936 and the aftermath of the Depression has folks moving around to see what the world can bring them.  In The Piano Lesson, the Charles family confronts ghosts of a reality passed – literally. Craving etched on a massive Piano hold the souls of slave and master.  The piano serves as a figure of what a f*cked up past can do to you. Boy Willie – excited about making cash up north to buy the family’s slave owner’s land –tries his hardest to get the pain from his sister so that he can sell it.

The weight of the piano is heavy on all involved. No one wants to let go of the object ( except Boy Willie) but, with it, they’ve held onto the story behind it. Members of the Charles family risked and gave their lives for the work of art and Bernice simply won’t let go.

The Piano Lesson makes one question the value of… everything (my fav phrase, huh?) The piece forced me to consider the actual value we put on objects and which object we chose to invest in. While Boy Willie wants to sell the piano to buy land in the South, Bernice considers selling the piano selling her family’s souls. It’s amazing how much value to place on our belongings and how one thing can mean so much to one person and nothing to another. It is also interesting how one person can mean so much to someone and be an absolute nobody to someone else. Imagine a time where it is normal to prepare yourself to be spilt from your family with absolutely no say in the matter. How about when it’s normal for a family of people to be traded for an object? What really is your worth? For a scene, we get to compare Bernice with Grace (who has none) a girl who Boy Willie brings home one night and his friend Lymon brings her home the next day. What value do men place on women? Men on men? Women on themselves?  A better question, have you ever experienced the true power of music? Its power to free souls?

The three are part of a 10 play series, The Pittsburgh Cycle, meant to show the Pittsburgh “Black Experience” in a particular decade. Here’s what Wiki says:

The Pittsburgh CycleWilson’s “Pittsburgh Cycle,” also often referred to as his “Century Cycle,” consists of ten plays—nine of which are set in Pittsburgh’s Hill District, an African-American neighborhood that takes on a mythic literary significance like Thomas Hardy’s Wessex, William Faulkner‘s Yoknapatawpha County, or Irish playwright Brian Friel‘s Ballybeg. The plays are each set in a different decade and aim to sketch the Black experience in the 20th century and “raise consciousness through theater” and echo “the poetry in the everyday language of black America”.[4]He was fascinated by the power of theater as a medium where a community at large could come together to bear witness to events and currents unfolding.[4]

“I think my plays offer (white Americans) a different way to look at black Americans,” he told The Paris Review. “For instance, in ‘Fences’ they see a garbageman, a person they don’t really look at, although they see a garbageman every day. By looking at Troy’s life, white people find out that the content of this black garbageman’s life is affected by the same things – love, honor, beauty, betrayal, duty. Recognizing that these things are as much part of his life as theirs can affect how they think about and deal with black people in their lives.”[1]

Hope you pick these us and enjoy!!!